Vaping: Is it Dangerous?

These days we are hearing a lot about vaping and it is not good news.  It has become a huge problem, especially among our youth.  But are we surprised?  I mean really surprised?  I know that I am not as I have never been one to think that burning and inhaling something, however “natural” it is, mixed with God knows what, would be ok and harmless. 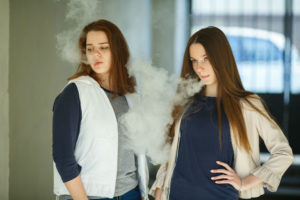 It is again about being sold a bunch of lies all in the name of making billions of dollars.  We saw it with the cigarette companies where for decades they gold us smoking cigarettes was harmless while all along they knew exactly its harms and we are still losing about 500,000 people a year to it in the US alone.  The same thing happened with the Opioid crisis which was are still in the middle of, losing 1,000s of American lives every year.  And now there’s vaping and marijuana.  Addiction is big money!

What exactly is vaping?  Vaping means using an electronic cigarette (e-cigarette) or other vaping device.  They do not burn tobacco, but cartridges contain nicotine and can contain other toxic chemicals that in fact can make vaping even worse than regular cigarettes.  E-cigarettes are battery powered and deliver nicotine through a liquid (called d-juice), which turns into a vapor when using the devices.

If is referred to as vaping because tiny puffs or clouds of vapor are produced when using these devices.

JUUL is one of the most popular of these devices.  So popular in fact, that vaping is also called “juuling”.

The liquid or e-juice comes in many different flavors.  And these flavors appeal to kids: candy, mint, bubble gum, popcorn, vanilla, chocolate, cucumber and many other such flavors.  Sometimes, kids think they are only inhaling the flavor and don’t realize that there is any nicotine in it at all, nor do they realize all the other chemicals that are in there.

Many people started vaping as a safer alternative to cigarette smoking.  A JUUL pod (the cartridge that goes into the vape pen and is disposable) has the amount of nicotine equivalent to 20 cigarettes, the equivalent to one pack a day, or 200 cigarette puffs.

There are many other things that can be in the cartridges such as THC, the chemical in marijuana that causes the high.  The THC oil used in a vape pen is very concentrated.  And, as with any other drug, the person vaping it can have no idea how their body will react and they also don’t know how strong the THC in the cartridge is.

In the last few weeks, there have been many patients taken to the ER and getting hospitalized with symptoms similar to pneumonia caused by bacterial or viral infections.  The severity of the disease has varied among patients with some requiring treatment in the intensive care unit and assistance to breath.

Unfortunately, in the last couple of weeks, we have lost people to what appear to be vaping related illnesses, when they had no previous lung issues.  As Dr. Robert R. Redfield, Director of the Center for Disease Control and Prevention said in a statement, “This tragic death in Illinois reinforces the serious risks associated with e-cigarette products.  Vaping exposes users to many different substances for which we have little information about related harms – including flavorings, nicotine, cannabinoids, and solvents.”

So it all comes back to finding out the truth for ourselves before doing anything that could possibly harm us.  Yes, it may take some work and study to find out really what is happening and what are the possible side effects of what we might be interested in using or taking.  In the long run, it can save our lives or the life of someone we love.

At the end of the day, it’s the person themselves who has to decide whether they will pick up a joint, or a vape pen, or swallow the Oxycontin.